Horrorford started as a conversation between Andy Black and Rich Matthews about their shared passion for horror films and how it would be great to watch some spooky rural horror flicks in the county’s gorgeous countryside.

Building upon the fantastic work of Borderlines Film Festival in helping to establish Herefordshire as a rural centre for film fans, Horrorford themes films to the county’s locations, adding an evocative outdoor element to the scary events unfolding onscreen.

Wednesday 31 October - Halloween family film screening at 5pm (you can vote for which film over on the Facebook event page) followed by George A. Romero’s DAY OF THE DEAD at 7.30pm at Oakchurch Farm Shop

Horrorford is the brainchild of Andy Black, Tourism Officer for Visit Herefordshire and Rich Matthews, Development Manager for Rural Media in Hereford. 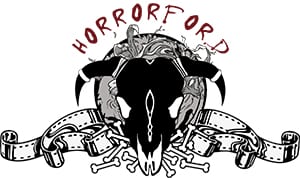