‘Tis the season for serial killers, poltergeists and creatures of the night, but how to sift through all of the frightful delights taking place across the Midlands this Halloween? Let us do it for you, that’s how. Take a look below for clas

‘Tis the season for serial killers, poltergeists and creatures of the night, but how to sift through all of the frightful delights taking place across the Midlands this Halloween? Let us do it for you, that’s how. Take a look below for classics, curios and a few kid-friendly scares.

CLASSICS
Birmingham’s Mockingbird Cinema is littered with spooky favourites this month, including John Carpenter’s The Thing (Oct 25 & 26) and The Lost Boys (Oct 24 & 26), whilst the Oak House Museum in Sandwell is screening Robert Wise’s 1963 classic The Haunting (Oct 25), preceded by a tour of the museum as the sun sets. Cricket bats at the ready as Birmingham’s the Electric shows Shaun Of The Dead (Oct 31), with Halloween cocktails served at appropriate moments during the film, whilst the Redrum venue in Stafford launches its new free monthly film night with (what else?) The Shining (Oct 31).

Over in the East Midlands, the green and pleasant lands of Derbyshire will hear The Silence Of The Lambs (Oct 31) echo through the corridors of County Hall in Matlock, whilst The Big Scream in Moira (Oct 25 & 26) offers two nights of woodland drive-in terror featuring Friday The 13th, The Texas Chainsaw Massacre, The Ring and Insidious. Nottingham’s Savoy Theatre will be dreaming of A Nightmare On Elm Street (Oct 28), original 70s slasher Halloween (Oct 21) will be unleashed at the Canalside Heritage Centre and Count Orlok will be released from his crypt courtesy of Nosferatu (Oct 30) at Leicester’s Guildhall, including a live piano score from Dmytro Morykit.

The Midlands Arts Centre celebrates the controversial BBC drama Ghostwatch (Oct 31) with writer and director on hand to talk about the legend of Mr. Pipes, whilst Trash Film Club dissect 80s mess Chopping Mall (Oct 19) in an actual shopping mall, namely the Telford Centre. Stourbridge’s supposedly haunted Bonded Warehouse should make the perfect location for a screening of Who Put Bella In The Wych Elm?: The Untold Secrets (Oct 30) - a documentary about the legend of a female skeleton found stuffed inside a tree in Hagley Wood - whilst Nottingham’s New Art Exchange offers up a free screening of Horror Noire (Oct 31), a documentary which delves into the tumultuous history of black Americans in the horror genre.

Winner of most unlikely Halloween screening is The Garage in Nottingham with Kevin Costner baseball drama Field Of Dreams (Oct 31). It’s got a few ghosts in it, so...it technically counts?

KIDS
Halloween can be spooky good fun as well as scary, and perennial kids favourite Hocus Pocus is screening at a number of venues, including the Midlands Arts Centre (Oct 31), the Mockingbird (Oct 29, Nov 1 & 2), as well as a number of outdoor spaces. Are aliens suitable Halloween fodder? Debatable, but the new Shaun The Sheep sequel Farmageddon has a cute alien at the heart of its story, which is reason enough for Leicester’s National Space Centre (Oct 26) and Cannock Chase (Oct 31) to host special Halloween screenings, with the latter including a special ‘glow run’, featuring glow in the dark elements in the forest.

More stop motion spooks take place at The Courtyard in Hereford thanks to Wallace & Gromit in The Curse of the Were-Rabbit (Oct 31), whilst a showing of Paranorman (Oct 31) at Derbyshire’s Northern Light Cinema is preceded by an eco-friendly craft workshop and Pixar’s ‘Day of the Dead’ animation Coco (Oct 30) screens for free at Christ Church in Coseley. 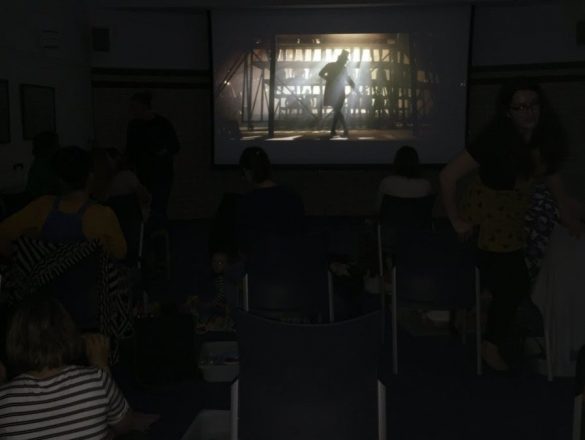 We talked to Suzanne Carter, one of the volunteers at Stirchley Open Cinema, about what challenges community cinemas face in reaching audiences.