The BFI today announces highlights of the UK-wide programme for BFI JAPAN 2021: 100 YEARS OF JAPANESE CINEMA, coming to cinemas from October – December 2021.

The BFI today announces highlights of the UK-wide programme for BFI JAPAN 2021: 100 YEARS OF JAPANESE CINEMA, coming to cinemas from October – December 2021. Highlights of the celebration will include a BFI re-release of Akira Kurosawa’s SEVEN SAMURAI (1954), a BFI JAPAN TOUR, featuring classics from Yasujirō Ozu and Akira Kurosawa, alongside cult titles from Kon Ichikawa and Toshio Matsumoto, which will feature many new 4K restorations and visit cinemas across the UK. For audiences who cannot attend a screening in their local cinema, there is a vast BFI JAPAN programme online on BFI Player Subscription. The BFI is also working closely with the National Lottery funded BFI Film Audience Network (FAN) to enable cinemas across the UK to host special screenings and events as part of BFI JAPAN.

Seasons and events will include Day For Night’s Urban, Natural, Human – exploring Japan on screen programme, showing at HOME, Manchester, Close-Up Cinema in London and more and a tour of highlights from Queer East Film Festival at Midlands Arts Centre in Birmingham, Showroom Cinema in Sheffield, HOME, Manchester and Edinburgh Filmhouse. Belfast Film Festival (4 – 13 November) will present a selection of surrealist Japanese films and Cambridge Film Festival will present a curated strand of films for its 40th edition (18 – 25 November). In Scotland, Screen Argyll is bringing Japan: Family, Community and the Sea to the islands in the Hebrides. Over the Halloween weekend (30 – 31 October), Chapter in Cardiff will celebrate the films of Nobuhiko Ōbayashi including his cult comedy horror HAUSU (1977).

Originally scheduled to run in venues across the UK from May – September 2020, the season was moved online due to the pandemic. An unprecedented number of Japanese films were programmed on BFI Player while cinemas across the country remained closed, resulting in films in the BFI JAPAN collection being streamed on BFI Player in excess of 400,000 times since then. After the Olympic and Paralympic Games in Tokyo come to a close this summer, the BFI picks up the torch to shine a light on 100 years of Japanese cinema this autumn.

BFI JAPAN will spotlight one of the world’s greatest cinematic traditions, one that has long inspired admiration and fascination among audiences and creatives the world over. Classic films by Akira Kurosawa, Yasujirō Ozu and Kenji Mizoguchi regularly rank at the very top of critics’ all-time lists; Studio Ghibli leads the animated world in visionary imagination; while waves of innovators from the cinematic rebels of the 60s to today’s audio-visual live artists and video game auteurs take the moving image to thrilling new places. The influence of Japanese cinema cannot be overstated – Kurosawa in particular influenced Sergio Leone’s A FISTFUL OF DOLLARS – an often shot-for-shot remake of YOJIMBO (1961) – and John Sturges’ THE MAGNIFICENT SEVEN, adapted from SEVEN SAMURAI (1954); George Lucas has long acknowledged Kurosawa’s influence on STAR WARS, from the narrative and thematic elements to costumes and names. More recently, George Miller’s MAD MAX: FURY ROAD and video game GHOST OF TSUSHIMA, in which players can adopt ‘Kurosawa mode’, have paid loving homage to the master filmmaker.

A BFI UK-wide re-release of Akira Kurosawa’s seminal masterpiece SEVEN SAMURAI (1954), back in cinemas UK-wide from 29 October. Genuinely epic in scale and tone, Kurosawa’s hugely influential samurai movie is a towering achievement which has to be experienced on the big screen. Confirmed venues so far include HOME, Manchester, IFI Dublin and Bristol Watershed.

The BFI has also curated a BFI JAPAN TOUR, featuring classics from Yasujirō Ozu and Akira Kurosawa, alongside titles like Kon Ichikawa's breathtakingly stylised AN ACTOR’S REVENGE (1963) and Toshio Matsumoto's kaleidoscopic masterpiece FUNERAL PARADE OF ROSES (1969). The tour will visit cinemas across the UK and will feature many new 4K restorations. Picturehouse cinemas across the UK (with venues in Edinburgh, Cambridge, Southampton, Exeter, York, Liverpool and many more) will present select titles from the tour in their ongoing reDiscover series, with key titles from Akira Kurosawa and Yasujirō Ozu screening at cinemas weekly from 17 October – 2 December.

Day for Night is a UK-based independent film organisation working across the film exhibition, specialist distribution, access and screen translation sectors. Urban, Natural, Human – exploring Japan on screen is their curatorial project exploring representation of the built and natural environments framed within Japan’s historical, current and future contexts. The project, incorporating archive material, documentaries, artists’ moving image and contemporary films, will consist of seven in venue film screenings, including HOME in Manchester on 4 and 5 December, and Close-Up Cinema in London, 12 – 14 November. A programme of 10 features and 20 short films will also be made available online. Titles include BOOK, PAPER, SCISSORS (2019) by Nanako Hirose, ASCENT (2016) by Fiona Tan, MEMENTO STELLA (2018) by Takashi Makino, TENZO (2019) by Katsuya Tomita, THE INLAND SEA (1991) by Lucille Carra, 3.11 A SENSE OF HOME (2011) (various directors) and shorts by Kaori Oda. More titles are to be announced.

Phizzical Productions, a company specialising in film curation, exhibition and production, led by artistic director Samir Bhamra (UK Asian Film Festival) will be presenting a unique season exploring the connections and influences between Indian and Japanese cinema. The season will take place in November and December at Belgrade Theatre in Coventry. LOVE IN TOKYO (1966) by Pramod Chakravorty, KONTORA (2019) by Anshul Chauhan and 8 THOTTAKAL (2017) by Sri Ganesh, will be among the films presented, alongside Akira Kurosawa’s SEVEN SAMURAI (1954) and STRAY DOG (1949).

Find screenings near you
Read the release 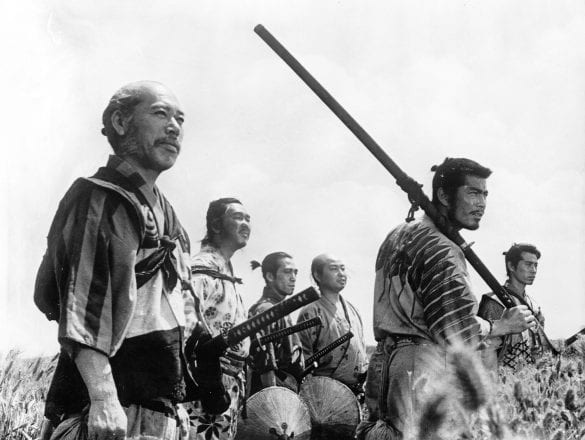 A UK-wide season of Japanese cinema, from early silents to contemporary innovation, and everything in between. Led by BFI in partnership with BFI FAN and…